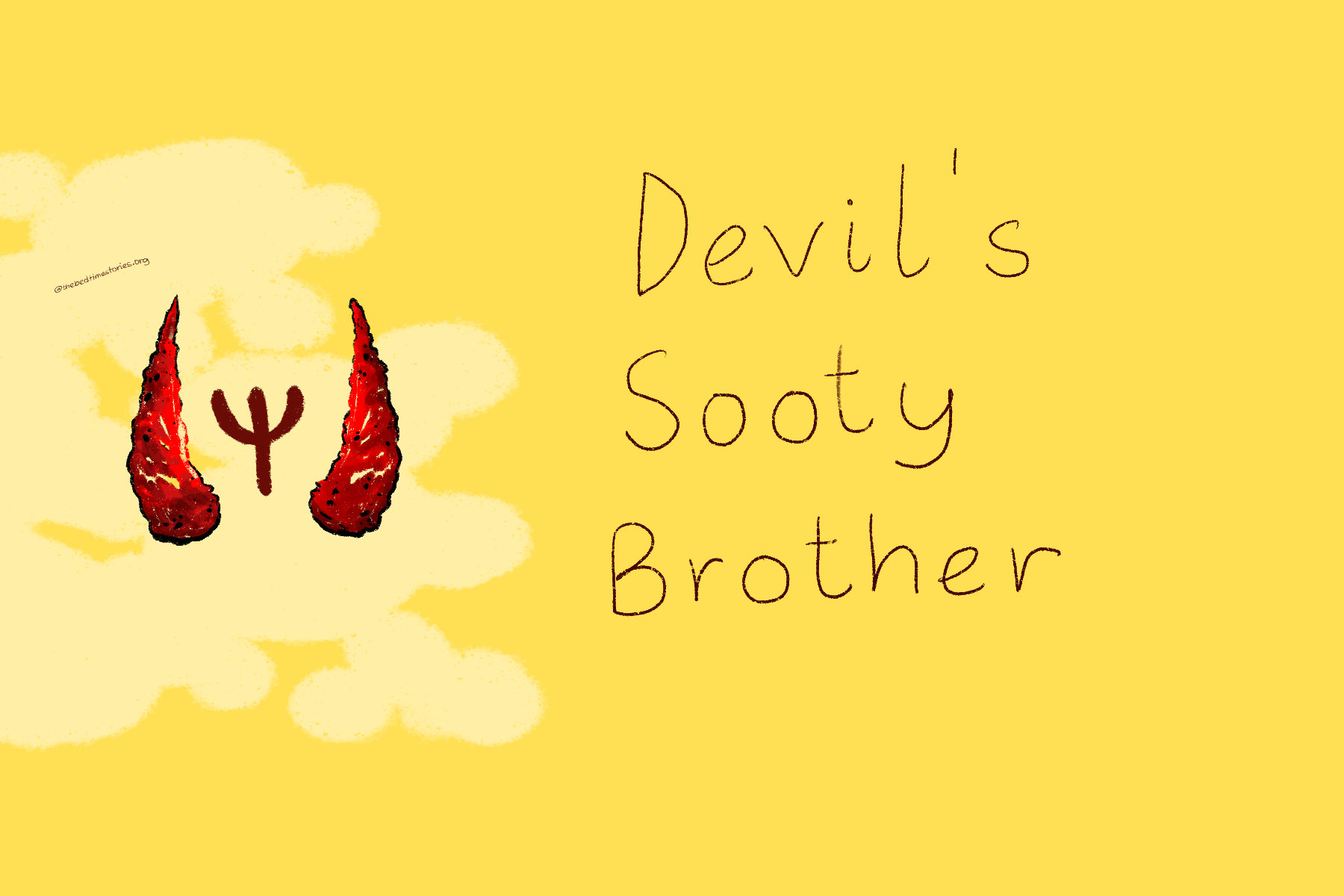 make his way. So he went out into the forest, and when he had walked

for a short time, he met a little man who turned out to be the devil.

The little man said to him, “What ails you? You seem so very

sorrowful?” Then the soldier said, “I am hungry but have no money.”

The devil said, “If you will hire yourself to me and be my

serving man, you shall have enough for all your life.

You shall serve me for seven years, and after that, you shall again be free. But

one thing I must tell you, and that is, you must not wash, comb, or

trim yourself, or cut your hair or nails, or wipe the water from your

eyes.” The soldier said, “All right, if there is no help for it,” and

went off with the little man, who straightway led him into hell.

Then he told him what he had to do. He was to poke the fire under

the kettles wherein the hell-broth was stewing, keep the house clean,

drive all the sweepings behind the doors, and see that everything was

in order, but if he once peeped into the kettles, it would go ill

The soldier said, “Good, I will take care.” And then the

old devil went out again on his wanderings, and the soldier entered

upon his new duties, made the fire, and swept the dirt well behind

the doors, just as he had been bidden.

When the old devil came back again, he looked to see if all had been

done, appeared satisfied, and went forth a second time. The soldier

now took a good look on every side, the kettles were standing all

around hell with a mighty fire below them, and inside they were

He would have given anything to look inside

them if the devil had not so particularly forbidden him.

At last, he could no longer restrain himself, slightly raised the lid

of the first kettle and peeped in, and there he saw his former

once had me in your power; now I have you.” And he quickly let the

lid fall, poked the fire, and added a fresh log. After that, he went

to the second kettle, raised its lid a little, and peeped in and

sat his former ensign. “Aha, old bird, I find you here; you

once had me in your power; now I have you.” He closed the lid again

be but his general. “Aha, old bird, do I meet you here? Once you

had me in your power, now I have you.” And he fetched the bellows and

made hell-fire blaze right under him.

So he did his work seven years in hell, did not wash, comb, or trim

himself, or cut his hair or nails, or wash the water out of his eyes,

only been half a year. When the time had gone by, the

devil came and said, “Well, Hans, what have you done?” “I poked the

“But you have peeped into the kettles as well, and it is lucky for you

that you added fresh logs to them, or else your life would have been

forfeited. Now that your time is up, will you go home again?” “Yes,”

said the soldier, “I should very much like to see what my father is

The devil said, “So that you may receive the

wages you have earned, go and fill your knapsack full of the

sweepings, and take it home with you. You must also go unwashed and

uncombed, with long hair on your head and beard, and with uncut nails

and dim eyes, and when you are asked whence you come, you must say,

from hell, and when you are asked who you are, you are to say, the

devil’s sooty brother, and my king as well.”

The soldier held his peace and did as the devil bade him, but he was

not satisfied with his wages. Then as soon as he was up in the

forest again, he took his knapsack from his back to empty it, but on

opening it, the sweepings had become pure gold.

“I should never have expected that,” said he, and was well pleased and entered the town.

The landlord was standing in front of the inn, and when he saw the

soldier approaching, he was terrified because Hans looked like such a

horrible sight, worse than a scarecrow.

He called to him and asked, “Whence do you come?”

“The devil’s sootybrother, and my king as well.”

Then the host would not let him enter,

but when Hans showed him the gold, he came and unlatched the door

himself. Hans then ordered the best room and attendance, ate, and

drank his fill, but neither washed nor combed as the devil

had bidden him and at last lay down to sleep. But the knapsack full

peace, and during the night, he crept in and stole it away.

The next morning, however, when Hans got up and wanted to pay the landlord and

travel further, his knapsack was gone. But he soon composed

himself and thought, you have been unfortunate from no fault of your

own. And straightway went back again to hell, complained of his

misfortune to the old devil, and begged for his help. The devil

said, “Seat yourself; I will wash, comb, and trim you, cut your hair

and nails, and wash your eyes for you.” And when he had done with

him, he gave him the knapsack back again full of sweepings and said,

“Go and tell the landlord that he must return your money, or else

I will come and fetch him, and he shall poke the fire in your place.”

Hans went up and said to the landlord, “You have stolen my money. If

you do not return it, you shall go down to hell in my place and will

look as horrible as I.” Then the landlord gave him the money, and

more besides, only begging him to keep it secret. And Hans was now a

smock to wear, and strolled about making music, for he had learned to

do that while he was with the devil in hell.

There was, however, an old king in that country before whom he had to

play, and the king was so delighted with his playing that he

promised him his eldest daughter in marriage. But when she heard

that she was to be married to an ordinary fellow in a smock, she said,

“Rather than do that, I would go into the deepest water.” Then the

king gave him the youngest, who was quite willing to do it to please

her father, and thus the devil’s sooty brother got the king’s

daughter, and when the aged king died, the whole kingdom likewise.

The Devil in Children’s Fairy Tales is common. But no other story stands out as much as the ‘devil and his sooty brother’ does. Written by the Grimm brother’s, it is a monumental piece of children’s literature.

The popularity of the Grimms’ collected folk tales has endured well. The tales are available in more than 100 translations and have been adapted by filmmakers (including Lotte Reiniger and Walt Disney), with films such as Snow White and the Seven Dwarfs. In the mid-20th century, the tales were used as propaganda by Nazi Germany; later in the 20th century, psychologists such as Bruno Bettelheim reaffirmed the value of the work in spite of the cruelty and violence in original versions of some of the tales, which were eventually sanitized by the Grimms.