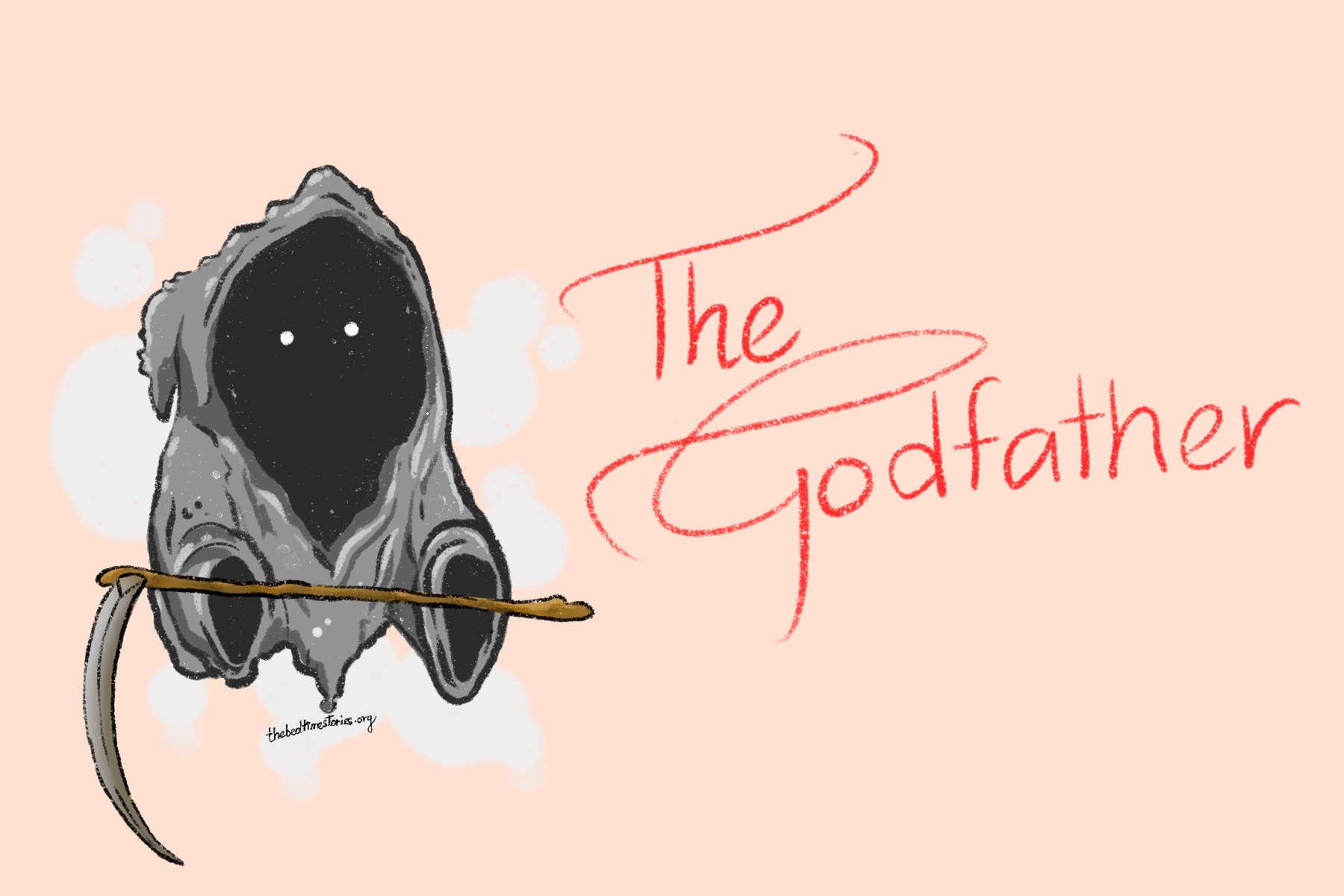 The Godfather-Written By Grimm Brothers

everyone in the world to be their godfather, and when still another

the child was born, no one else was left whom he could invite.

He knew not what to do, and, in his disparity, he lied down

and fell asleep.  Then he dreamt that he was to go outside the

gate, and ask the first person he met to be his godfather.  When he awoke,

asked the first person who came up to him to be his godfather.

The stranger presented him with a little glass of water and said,

this is wonderful water; with it, you can heal the sick; only

you must see where death stands.  If he is standing by the

patient’s head, give the patient some water, and he will

be healed, but if death is standing by his feet, all trouble

will be in vain, for the sick man must die.  From this time forth,

not, and he became famous for his skill and earned a great deal

Once, he was called into the child of the king, and

when he entered, he saw death standing by the child’s head and

cured it with the water, and he did the same a second time, but

the third time death was standing by its feet, and then he knew

the child had to die.

Once, the man thought he would visit the godfather and tell him

how he had succeeded with the water.  But when he entered the

house, the strangest things were happening.  On the first

flight of stairs, the broom and shovel were disputing,

knocking each other about violently.  He asked them, where does

the godfather live?  The broom replied, one flight of stairs

higher up.  When he came to the second flight, he saw a heap of

dead fingers lying.  He asked, where does the godfather live.

One of the fingers replied, one flight of stairs higher. A heap of dead heads lay in the third flight, which again directed him to the flight beyond.  On the fourth flight, he saw fishes on

the fire, which frizzled in pans and baked themselves.  They,

too, said, one flight of stairs higher.  And when he had

ascended the fifth, he came to the door of a room and peeped

through the keyhole, and there he saw the godfather who had

a pair of long horns.  When he opened the door and went in,

the godfather got into bed quickly and covered himself

up.  Then said the man, sir godfather, what a strange household

you have.  When I came to your first flight of stairs, the shovel

and broom were quarreling, and beating each other violently.

How stupid you are, said the godfather.  That was the boy

and the maid talking to each other.  But on the second flight, I

saw dead fingers lying.  Oh, how silly you are.  Those were some

roots of scorzonera.  On the third flight lay a heap of dead

men’s heads.  Foolish man, those were cabbages.  On the fourth

flight, I saw fish in a pan, hissing and baking

themselves.  When he had said that, the fishes came and served

themselves up.  And when I got to the fifth flight, I peeped

through the keyhole of a door, and there, godfather, I saw

you, and you had long, long horns.  Oh, that is not true.

The man became alarmed and ran out; if he had not, who knows

what the godfather would have done to him.

The popularity of the Grimms’ collected folk tales has endured well. The tales are available in more than 100 translations and have been adapted by filmmakers (including Lotte Reiniger and Walt Disney), with films such as Snow White and the Seven Dwarfs. In the mid-20th century, the tales were used as propaganda by Nazi Germany; later in the 20th century, psychologists such as Bruno Bettelheim reaffirmed the value of the work in spite of the cruelty and violence in original versions of some of the tales, which were eventually sanitized by the Grimms.