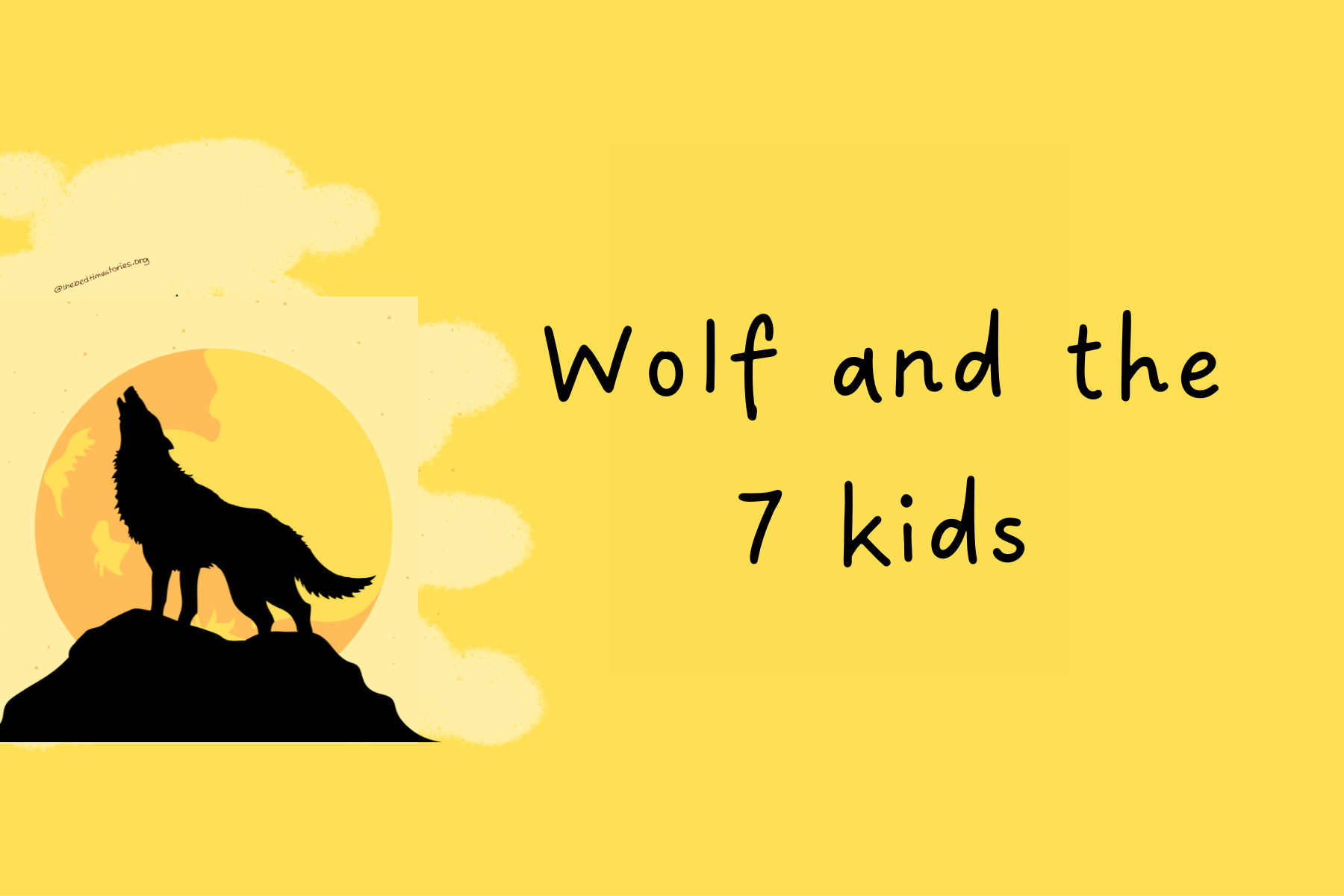 The Wolf And 7 Kids: by Grimm Brothers

There was once upon a time an old goat who had seven little kids, and

loved them with all the love of a mother for her children. One day

she wanted to go into the forest and fetch some food.

So she called all seven to her and said, dear children, I have to go into the

forest, be on your guard against the wolf, if he comes in, he will

devour you all – skin, hair, and everything.  The wretch often

disguises himself, but you will know him at once by his rough voice

and his black feet.

The kids said, dear mother, we will take good

care of ourselves, you may go away without any anxiety.  Then the old

one bleated, and went on her way with an easy mind.

It was not long before some one knocked at the house-door and called,

open the door, dear children, your mother is here, and has brought

something back with her for each of you.  But the little kids knew

that it was the wolf, by the rough voice.  We will not open the door,

cried they, you are not our mother.

She has a soft, pleasant voice, but your voice is rough, you are the wolf.  Then the wolf went away to a shopkeeper and bought himself a great lump of chalk, ate this and made his voice soft with it.

Then he came back, knocked at the door of the house, and called, open the door, dear children, your mother is here and has brought something back with her for each of you.

But the wolf had laid his black paws against the window, and

the children saw them and cried, we will not open the door, our

mother has not black feet like you, you are the wolf.  Then the wolf

ran to a baker and said, I have hurt my feet, rub some dough over

them for me.  And when the baker had rubbed his feet over, he ran to

the miller and said, strew some white meal over my feet for me.  The

miller thought to himself, the wolf wants to deceive someone, and

refused, but the wolf said, if you will not do it, I will devour you.

Then the miller was afraid, and made his paws white for him. Truly,

this the way of mankind.

So now the wretch went for the third time to the house-door, knocked

at it and said, open the door for me, children, your dear little

mother has come home, and has brought every one of you something back

from the forest with her.

The little kids cried, first show us your paws that we may know if you are our dear little mother.  Then he put his paws in through the window, and when the kids saw that they were white, they believed that all he said was true, and opened the door.

hide themselves.  One sprang under the table, the second into the

bed, the third into the stove, the fourth into the kitchen, the fifth

into the cupboard, the sixth under the washing-bowl, and the seventh

But the wolf found them all, and used no great

ceremony, one after the other he swallowed them down his throat.  The

youngest, who was in the clock-case, was the only one he did not

find. When the wolf had satisfied his appetite he took himself off,

laid himself down under a tree in the green meadow outside, and began

to sleep.  Soon afterwards the old goat came home again from the

forest.  Ah.  What a sight she saw there.  The house-door stood wide

open.  The table, chairs, and benches were thrown down, the

washing-bowl lay broken to pieces, and the quilts and pillows were

pulled off the bed.  She sought her children, but they were nowhere

to be found.  She called them one after another by name, but no one

answered.  At last, when she caame to the youngest, a soft voice

cried, dear mother, I am in the clock-case.

She took the kid out, and it told her that the wolf had come and had eaten all the others. Then you may imagine how she wept over her poor children.

At length in her grief she went out, and the youngest kid ran with

her.  When they came to the meadow, there lay the wolf by the tree

and snored so loud that the branches shook.  She looked at him on

gorged belly.  Ah, heavens, she said, is it possible that my poor

children whom he has swallowed down for his supper, can be still

Then the kid had to run home and fetch scissors, and a needle

and thread and the goat cut open the monster’s stomach, and hardly

had she make one cut, than one little kid thrust its head out, and

when she cut farther, all six sprang out one after another, and were

all still alive, and had suffered no injury whatever, for in his

greediness the monster had swallowed them down whole.

What rejoice there was.  They embraced their dear mother, and jumped like a sailor

at his wedding.  The mother, however, said, now go and look for some

big stones, and we will fill the wicked beast’s stomach with them

while he is still asleep.  Then the seven kids dragged the stones

thither with all speed, and put as many of them into his stomach as

they could get in, and the mother sewed him up again in the greatest

haste, so that he was not aware of anything and never once stirred.

When the wolf at length had had his fill of sleep, he got on his

legs, and as the stones in his stomach made him very thirsty, he

wanted to go to a well to drink.  But when he began to walk and move

about, the stones in his stomach knocked against each other and

rattled.  Then cried he,  what rumbles and tumbles against my poor

bones.  I thought ’twas six kids,  but it feels like big stones. And

when he got to the well and stooped over the water to drink, the

heavy stones made him fall in, and he had to drown miserably.  When

the seven kids saw that, they came running to the spot and cried

about the well with their mother.

The Wolf And 7 Kids by Grimm Brothers

The Wolf And 7 Kids in Children’s Fairy Tales is familiar. It’s one of the quintessential short stories in every children’s book. Written by the Grimm brothers, it is a monumental piece of children’s literature.

Read more short stories like ‘The Wolf And 7 Kids’

Read more like ‘The Wolf And 7 Kids’: More Stories

Read more like ‘The Wolf And 7 Kids’: Adventure Stories

Both brothers attended the University of Marburg, where they became curious about German folklore, which grew into a lifelong dedication to collecting German folk tales.

Read more like ‘The Wolf And 7 Kids’: Kid’s Stories

The rise of romanticism in the 19th century revived interest in traditional folk stories, which to the brothers represented a pure form of national literature and culture. Intending to research a scholarly treatise on folk tales, they established a methodology for collecting and recording folk stories that became the basis for folklore studies.

Read more like ‘The Wolf And 7 Kids’: Fairy Tales

Between 1812 and 1857 their first collection was revised and republished many times, growing from 86 stories to more than 200. In addition to writing and modifying folk tales, the brothers wrote collections of well-respected German and Scandinavian mythologies.

Read more like ‘The Wolf And 7 Kids’: Moral Stories

Read more like ‘The Wolf And 7 Kids’: Kid’s Stories

The popularity of the Grimms’ collected folk tales has endured well. The tales are available in more than 100 translations and have been adapted by filmmakers (including Lotte Reiniger and Walt Disney), in films such as Snow White and the Seven Dwarfs.