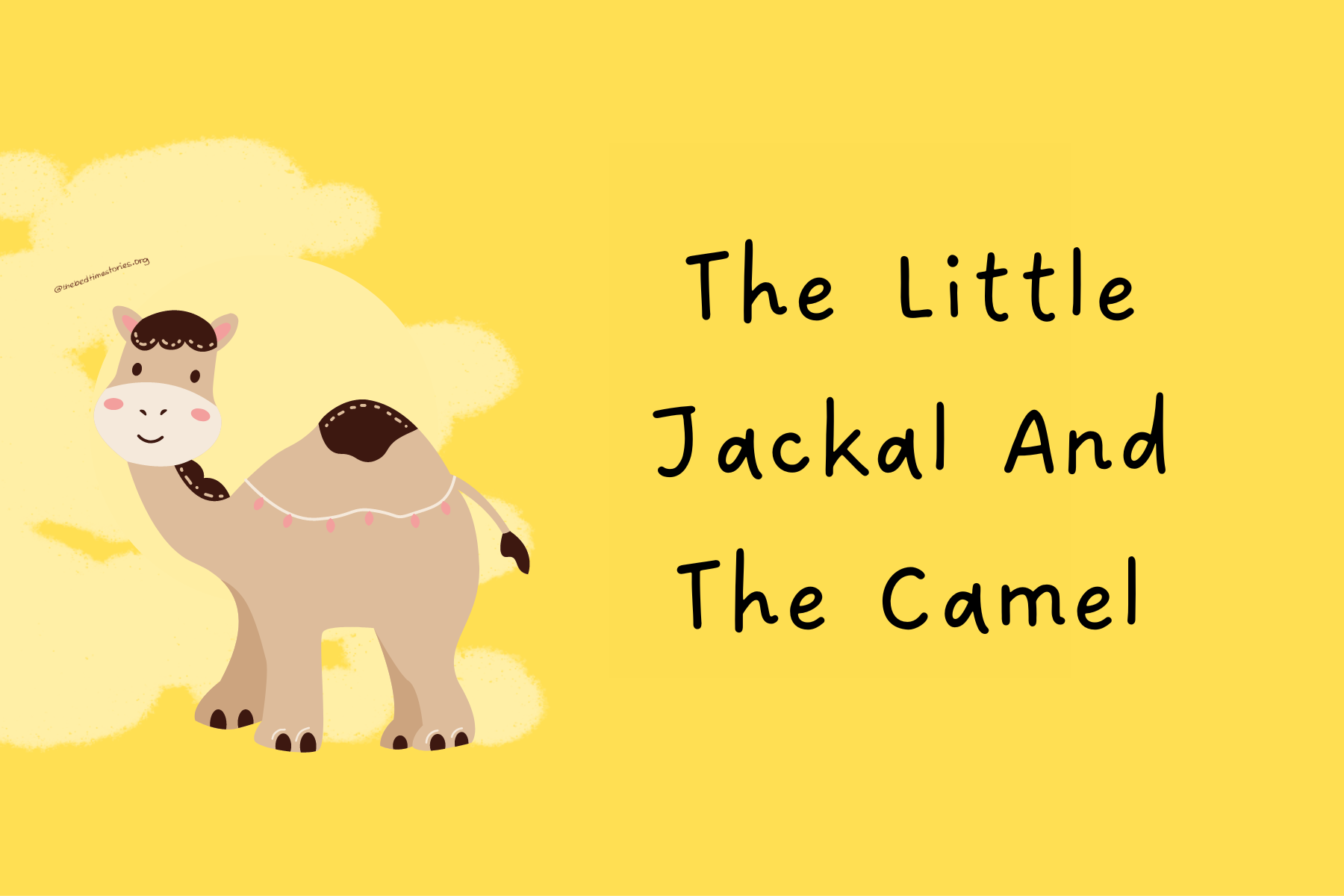 The little Jackal was, as we know, exceedingly fond of shellfish and river crabs. Finally, he reached a point where he had hunted down almost all crabs that lived by the bank of the nearby river. He suspected there’d be plenty of crabs to gorge upon on the opposite bank, but he realised, he didn’t know how to swim,

He chalked up a shrewd idea. He went to his friend the Camel and said-

“Oh my dear friend, it has come to my knowledged that there lies a field full of sugarcane near by, I shall accompany you there, if you allow.”

“Indeed I will,” replied the Camel, who was very fond of sugar cane.

“Where is it?”, he curiously asked.

“It is on the opposite bank of the river,” said the little Jackal, “But we can make it if you shall allow me to travel on your back as you stride across the river.”

The camel agreed and off they went to the other side of the stream. Once they reached, the jackal jumped off of that Camel’s back, showed him the route towards the sugarcane fields. Then, he quickly scoured through the banks, filling himself up with crabs he’d hunt.

The jackal was swift and got done with his meal really quickly. But the camel, being a slow eater, had barely had anything. The jackal felt bored and wanted to go back home. With nothing left to do, he sprang around the sugar cane field howling and dancing.

The villagers heard him all at once.

“There is a Jackal in the sugar cane,” they said; “He will dig holes and destroy the roots. We must go down and drive him out!”

So they came rushing to the fields, with sticks and stones. Seeing this, the jackal hid away. When they got there, there were no signs of a jackal, but they caught sight of the camel, eating all the juicy sugar cane. They lashed at him all at once and beat him up recklessly.

When they had gone, leaving the poor Camel half killed, the little Jackal came dancing back from his hiding.

“Well, you are a pretty sneaky friend!” said the Camel. “The ordeal of making such a noise, with your shouting and singing! You brought this upon me. What in the world made you do it? Why did you shout and sing?”

“Oh, I don’t really know why,” said the little Jackal,” I always sing after dinner!”

He took the little Jackal on his back and jumped into the water. When he began to swim he swam out to where the river was the very deepest. There he stopped, and said,—

“I have the strangest feeling,” said the Camel, “I feel as if I must roll over.”

“‘Roll over! What?” cried the Jackal. “My goodness, don’t do that! If you do that, you’ll drown me! What in the world makes you want to do such a crazy thing? Why should you want to roll over?”

“Oh, I don’t know why,” said the Camel slowly, “but I always roll over after dinner!”

So he rolled over.

And the little Jackal was drowned, for his habits, but the Camel safely swam back home.

The tale of The Little Jackal And the Camel instils good moral values amongst children. This shall help them develop into responsible humans who share a common sense of compassion, wit and kindness.