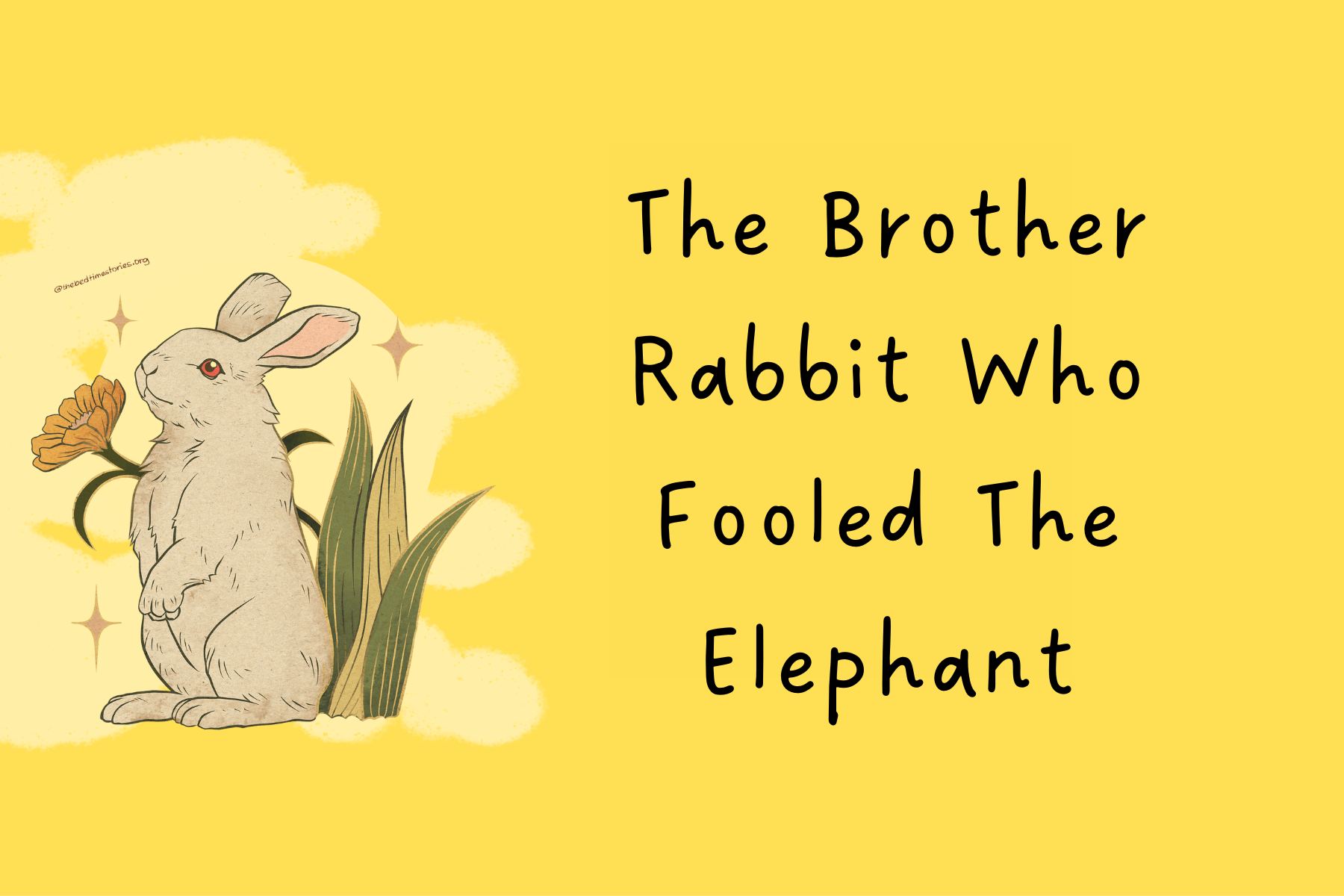 “You are the biggest thing on the land, Brother Elephant,” said the Whale, “and I am the biggest thing in the sea; if we join together we can rule all the animals in the world, and have our way about everything.”

“Very good, very good,” trumpeted the Elephant; “that suits me; we will do it.”

Little Brother Rabbit sniggered to himself. “They won’t rule me,” he said. He ran away and got a very long, very strong rope, and he got his big drum and hid the drum a long way off in the bushes. Then he went along the beach till he came to the Whale.

“Oh, please, dear, strong Mr. Whale,” he said, “will you have the great kindness to do me a favor? My cow is stuck in the mud, a quarter of a mile from here. And I can’t pull her out. But you are so strong and so obliging, that I venture to trust you will help me out.”

The Whale was so pleased with the compliment that he said, “Yes,” at once.

“Then,” said the Rabbit, “I will tie this end of my long rope to you, and I will run away and tie the other end around my cow, and when I am ready I will beat my big drum. When you hear that, pull very, very hard, for the cow is stuck very deep in the mud.”

“Huh!” grunted the Whale, “I’ll pull her out if she is stuck to the horns.”

Little Brother Rabbit tied the rope-end to the Whale and ran off, lippety, lippety, till he came to the place where the Elephant was.

“Oh, please, mighty and kindly Elephant,” he said, making a very low bow, “will you do me a favor?”

“What is it?” asked the Elephant.

“My cow is stuck in the mud, about a quarter of a mile from here,” said little Brother Rabbit, “and I cannot pull her out. Of course, you could. If you will be so very obliging as to help me ——”

“Then,” said little Brother Rabbit, “I will tie one end of this long rope to your trunk, and the other to my cow, and as soon as I have tied her tightly I will beat my big drum. When you hear that, pull; pull as hard as you can, for my cow is very heavy.”

“Never fear,” said the Elephant, “I could pull twenty cows.”

“I am sure you could,” said the Rabbit, politely, “only be sure to begin gently, and pull harder and harder till you get her.”

Then he tied the end of the rope tightly around the Elephant’s trunk and ran away into the bushes. There he sat down and beat the big drum.

“This is a remarkably heavy cow,” said the Elephant; “but I’ll fetch her!” And he braced his forefeet in the earth and gave a tremendous pull.

“Dear me!” said the Whale. “That cow must be stuck mighty tight”; and he drove his tail deep in the water, and gave a marvelous pull.

He pulled harder; the Elephant pulled harder. Pretty soon the Whale found himself sliding toward the land. The reason was, of course, that the Elephant had something solid to brace against, and, besides, as fast as he pulled the rope in a little, he took a turn with it round his trunk!

But when the Whale found himself sliding toward the land he was so provoked by the cow that he dived headfirst, down to the bottom of the sea. That was a pull! The Elephant was jerked off his feet and came slipping and sliding to the beach, and into the surf. He was terribly angry. He braced himself with all his might and pulled his best. At the jerk, up came the Whale out of the water.

“Who is pulling me?” spouted the Whale.

“Who is pulling me?” trumpeted the Elephant.

And then each saw the rope in the other’s hold.

“I’ll teach you to play cow!” roared the Elephant.

“I’ll show you how to fool me!” fumed the Whale. And they began to pull again. But this time the rope broke, the Whale turned a somersault, and the Elephant fell over backward.

At that, they were both so ashamed that neither would speak to the other. So that broke up the bargain between them.

The tale of the How Brother Rabbit Fooled the Whale and the Elephant instils good moral values amongst children. This shall help them develop into responsible humans who share a common sense of compassion, wit and kindness.