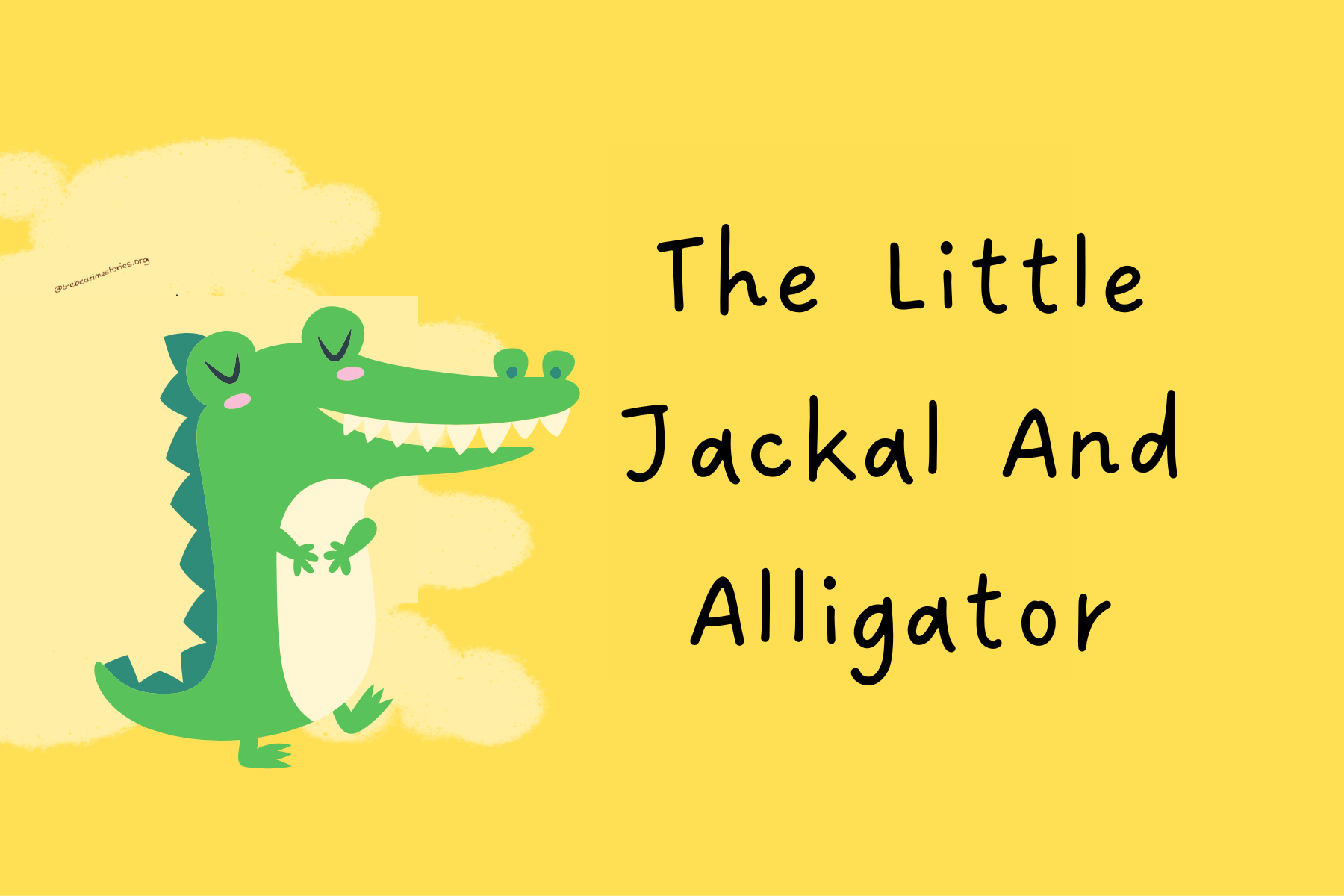 There once lived a little jackal who was very fond of crabs. He used to go down by the river and hunt along the edges for crabs and oysters.

And once, as he was hunting for crabs, he was so hungry that he put his entire paw into the river water chasing after a crab without looking in first—something you never should do! The minute he put his paw in, snap!—the big green Alligator who lived in the mud down there had it within his jaws.

“Oh, dear!” thought the little Jackal; “The big green Alligator has my paw in his mouth! In a minute, he shall pull me down and gobble me up! What shall I do? what shall I do?” Then he thought, suddenly, “I’ll deceive him!”

So he put on a very cheery voice as if there wasn’t any problem at all, and he said, “Ho! ho! Clever  Mr. Alligator! Smart Mr Alligator! To take an old bulrush root for my paw! I hope you’ll find it quite tender!”

The old Alligator was hidden away beneath the mud and bulrush leaves, and he couldn’t see anything. He thought, “Pshaw! I’ve made a mistake.” So he opened his mouth and accidentally let the little Jackal escape.

The little Jackal ran away as fast as he could, and as he ran, he screamed out—

The old Alligator lashed with his tail and snapped with his jaws, but it was too late; the little Jackal was way out of reach.

After this matter, the little Jackal kept away from the river, and thus, out of danger. But after about a week, he got a craving for crabs that nothing else could satisfy; he felt that he must have a crab. So he went down by the river and looked all around very cautiously. He didn’t see the old Alligator anywhere, but he thought to himself, “I think I should not take any chances.” So he stood still and began to talk out loud to himself. He said—

“When I don’t see any little crabs on the land, I generally see them sticking out of the river water, and then I put my paw in and catch them. I wonder if there are any fat little crabs in the water today-”

The old Alligator was hiding down in the mud at the very bottom of the river, and when he heard what the little Jackal said, he thought, “Aha! I’ll pretend to be a little crab, and when he puts his paw in, I’ll make him my meal.” So, he stuck the black end of his snout above the water and waited.

The little Jackal took one look, and then he said,—

“Thank you, Mr Alligator! Kind Mr Alligator! You are extremely kind to show me exactly where you are! I will have dinner elsewhere.” And he gushed away as fast as the wind.

The old Alligator foamed at the mouth, he was terribly angry, but the little Jackal was far gone.

The little Jackal was kept away from the river for two whole weeks. Then, one day, he felt that nothing but crabs could satisfy him. He felt that he must have at least one crab. Very cautiously, he went down to the river and looked all around. He saw no sign of the old Alligator. Still, he did not want to take any chances. So he stood particularly still and began to talk to himself—it was the little key he had. He said—

“When I don’t see any little crabs on the shore or sticking up out of the water, I usually see them blowing bubbles from under the water; the little bubbles go puff, puff, puff, and then they go pop, pop, pop, and they show me where the juicy little crabs are, so I can put my paw in and catch them. I wonder if I shall see any little bubbles today?”

The old Alligator, lying low in the mud and weeds, heard this, and he thought, “Pooh! That’s easy enough; I’ll just blow some bubbles like little crabs, and then he will put his paw in, where I can get it.”

So he blew with all his strength until a mighty blast and the bubbles rose in a perfect whirlpool, fizzing and swirling.

The little Jackal didn’t have to be told who was underneath those bubbles: he took one quick look and ran off. But as he went, he sang—

“Thank you, Mr Alligator! Kind Mr Alligator! You are the kindest Alligator in the world too show me where you are so accurately! I’ll feast at some other part of the river.”

The Little Jackal and the alligator is a folklore from India. This story provides strong moral values to children that they can inculcate in their own lives and grow into compassionate and mature adults. Discover our website for more such works.