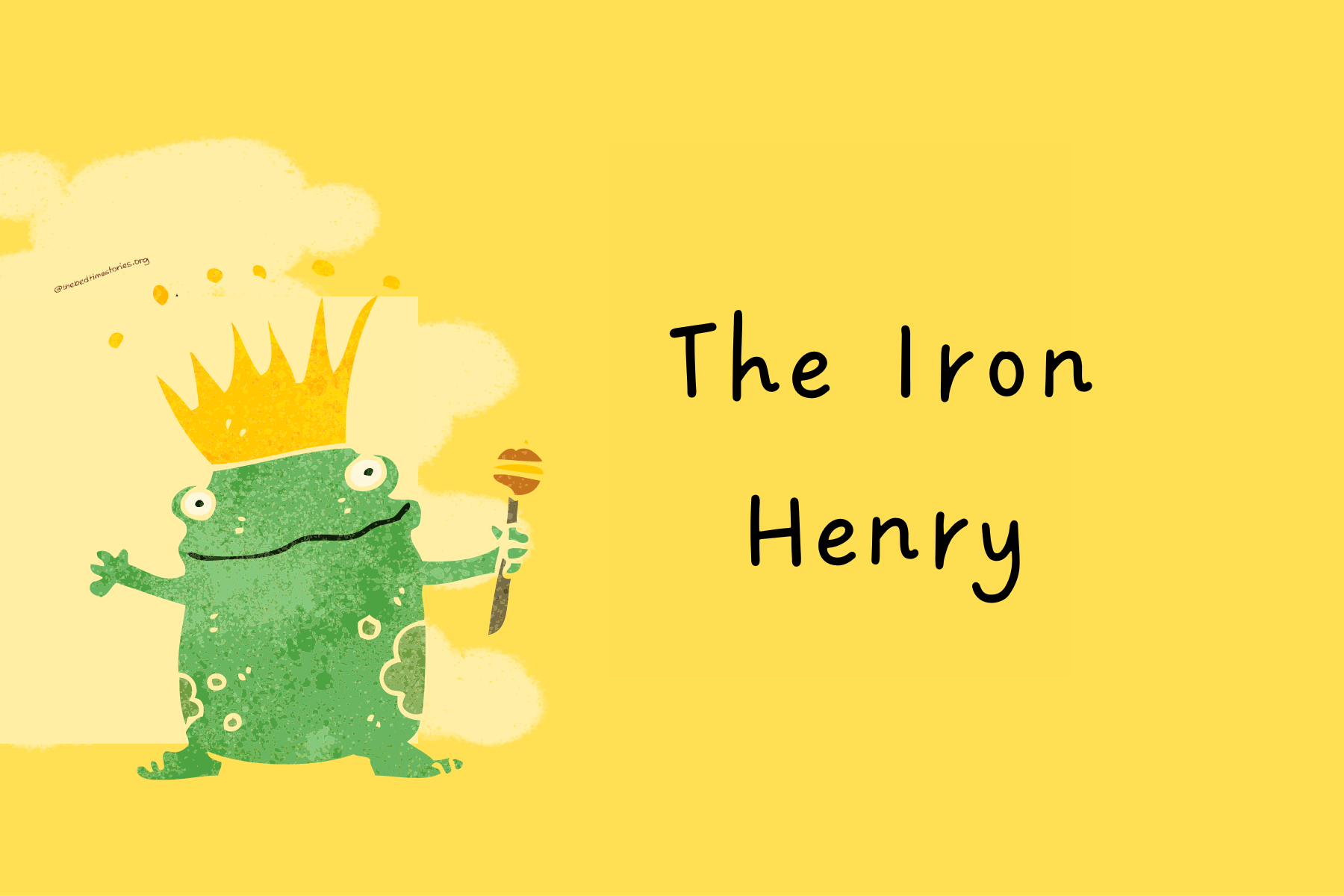 The Iron Henry: by Grimm Brothers

In olden times when wishing still helped one, there lived a king whose daughters were all beautiful, but the youngest was so beautiful that the sun itself, which has seen so much, was astonished whenever it shone in her face.

Close by the king’s castle lay a great dark forest, and under an old lime tree in the forest was a well, and when the day was hot. The king’s child went out into the forest and sat down by the side of the cool fountain, and when she was bored, she took a golden ball and threw it up on high and caught it, and thus the ball was her favorite plaything. Now it so happened that on one occasion, the princess’s golden ball did not fall into the little hand she was holding up but onto the ground beyond and rolled straight into the water.

The king’s daughter followed it with her eyes, but it vanished, and the well was deep, so deep that the bottom could not be seen. At this, she began to cry, cried louder and louder, and could not be comforted. And as she thus lamented, someone said to her, “What ails you, king’s daughter? You weep so that even a stone would show pity.”

She looked round to the side from whence the voice came and saw a frog stretching forth its big, ugly head from the water. “Ah, old water-splasher is it you,” she said, “I am weeping for my golden ball, which has fallen into the well.” “Be quiet, and do not weep,” answered the frog, “I can help you, but what will you give me if I bring your plaything up again?” “Whatever you will have, dear frog,” said she, “My clothes, my pearls and jewels, and even the golden crown which I am wearing.”

The frog answered, “I do not care for your clothes, your pearls, and jewels, nor for your golden the iron henry crown, but if you will love me and let me be your companion and play-fellow, and sit by you at your little table, and eat off your little golden plate, and drink out of your little cup, and sleep in your little bed – if you will promise me this, I will go down below and bring you your golden ball up again.”

“Oh yes,” said she, “I promise you all you wish if you will bring me my ball back again.”

But she thought, “How the silly frog, the irony henry does talk. He sits in the water with the other frogs and croaks. He can be no companion to any human being.” But the frog, when he had received this promise, put his head into the water and sank; in a short while, he came swimming up again with the ball in his mouth and threw it on the grass.

The king’s daughter was delighted to see her pretty plaything once more and picked it up and ran away with it. “Wait, wait,” said the frog. “Take me with you. I can’t run as you can.” But what did it avail him to scream the iron henry croak after her as loudly as he could? She did not listen to it but ran home and soon forgot the poor frog, who was forced to go back into his well again.

The next day when she had seated herself at the table with the king and all the courtiers and was eating from her little golden plate, something came creeping, splish splash, splish splash, up the marble staircase, and when it had got to the top, it knocked at the door and cried, “Princess, youngest princess, open the door for me.” She ran to see who was outside, but when she opened the door, there sat the frog in front of it.

Then she slammed the door to, in great haste, sat down to dinner again, and was quite frightened. The king saw plainly that her heart was beating violently and said, “My child, what are you so afraid of? Is there, perchance, a giant outside who wants to take you away?” “Ah, no,” replied she. “It is no giant but a disgusting frog.” “What does a frog want with you?”

“Ah, dear father, yesterday as I was in the forest sitting by the well, playing, my golden ball fell into the water. And because I cried so, the frog brought it out again for me, and because he so insisted, I promised him he should be my companion, but I never thought he would be able to come out of his water. And now he is outside there and wants to come into me.”

Then said the king, “That which you have promised must you perform. Go and let him in.” She went and opened the door, and the frog hopped in and followed her, step by step, to her chair. There he sat and cried, “Lift me beside you.” She delayed until, at last, the king commanded her to do it. Once the frog was on the chair, he wanted to be on the table, and when he was on the table, he said, “Now, push your little golden plate nearer to me so that we may eat together.” She did this, but it was easy to see that she did not do it willingly. The iron henry frog enjoyed what he ate, but almost every mouthful she took choked her. At length, he said, “I have eaten and am satisfied. Now I am tired, take me into your little room and make your little silken bed ready, and we will both lie down and sleep.”

The king’s daughter began to cry, for she was afraid of the cold frog she did not like to touch and was now to sleep in her pretty, clean little bed. But the king grew angry and said, “He who helped you when you were in trouble ought not afterward to be despised by you.”

So she took hold of the frog with two fingers, carried him upstairs, and put him in a corner, but when she was in bed, he crept to her and said, “I am tired. I want to sleep as well as you. Lift me, or I will tell your father.”

At this, she was terribly angry and took him up and threw him with all her might against the wall. “Now, will you be a quiet, odious frog,” said she. But when he fell, he was not the frog: the iron henry but a king’s son with kind and beautiful eyes. He, by her father’s will, was now her dear companion and husband. Then he told her how a wicked witch had bewitched him, how no one could have delivered him from the well but herself, and that tomorrow they would go together into his kingdom.

Then they went to sleep, and next morning when the sun awoke them, a carriage came driving up with eight white horses, which had white ostrich feathers on their heads, and were harnessed with golden chains, and behind stood the young king’s servant, the iron Henry.

The iron Henry had been so unhappy when his master was changed into a frog that he had caused three iron bands to be laid around his heart, lest it burst with grief and sadness. The carriage was to conduct the young king into his kingdom. The iron Henry helped them both in, placed himself behind again, and was full of joy because of this deliverance. And when they had driven a part of the way, the king’s son heard a cracking behind him as if something had broken. So he turned round and cried, “Henry, the carriage is breaking.”

“No, master, it is not the carriage. It is a band from my heart that was put there in my great pain when you were a frog imprisoned in the well.” Again and once again, while they were on their way, something cracked, and each time the king’s son thought the carriage was breaking, but it was only the bands that were springing from the heart of Faithful Henry because his master was set free and was happy.

The Iron Henry by Grimm Brothers

The Iron Henry is a very well-known Children’s Fairy Tales story. It’s one of the quintessential short stories in every children’s book. Written by the Grimm brothers, it is a monumental piece of children’s literature.

Both brothers attended the University of Marburg, where they became curious about German folklore, which became a lifelong dedication to collecting German folk tales.

The rise of romanticism in the 19th century revived interest in traditional folk stories, which to the brothers, represented a pure form of national literature and culture. Intending to research a scholarly treatise on folk tales, they established a methodology for collecting and recording folk stories that became the basis for folklore studies.

Between 1812 and 1857, their first collection was revised and republished many times, growing from 86 stories to more than 200. In addition to writing and modifying folk tales, the brothers wrote collections of well-respected German and Scandinavian mythologies.

The popularity of the Grimms’ collected folk tales has endured well. The stories are available in more than 100 translations and have been adapted by filmmakers (including Lotte Reiniger and Walt Disney) in films such as Snow White and the Seven Dwarfs.