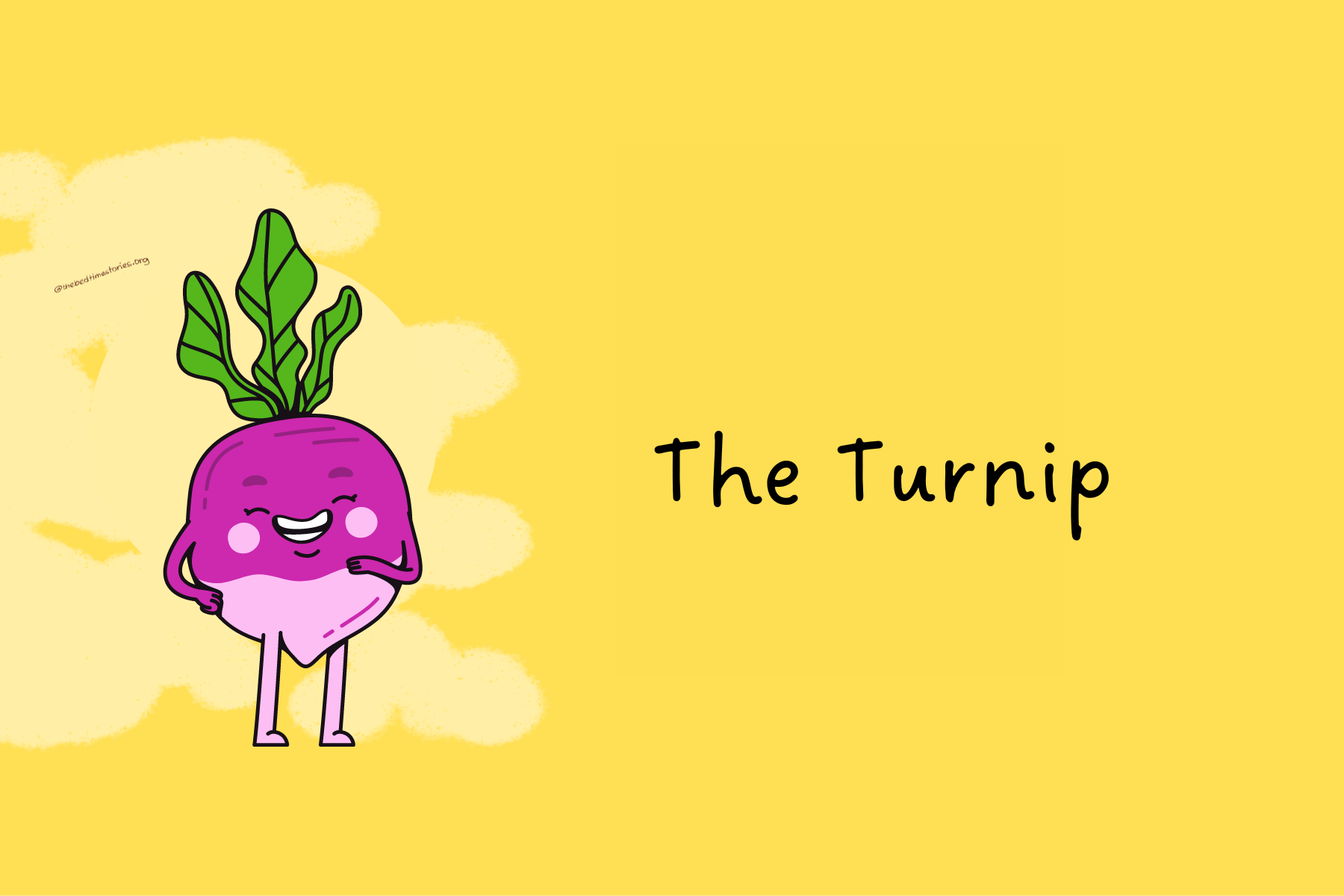 The Turnip By Grimm Brothers

There were once two brothers who both served as soldiers, one of them was rich, and the other poor. Then the poor one, to escape from his poverty, doffed his soldier’s coat, and turned farmer. He dug and hoed his bit of land, and sowed it with turnip-seed.

The seed came up, and one turnip grew there which became large and strong, and visibly grew bigger and bigger, and seemed as if it would never stop growing, so that it might have been called the princess of turnips, for never was such an one seen before, and never will such an one be seen again.

At length it was so enormous that by itself it filled a whole cart, and two oxen were required to draw it, and the farmer had not the least idea what he was to do with the turnip, or whether it would be a fortune to him or a misfortune.

At last he thought, if you sell it, what will you get for it that is of any importance, and if you eat it yourself, why, the small turnips would do you just as much good. It would be better to take it to the king, and make him a present of it.

So he placed it on a cart, harnessed two oxen, took it to the palace, and presented it to the king. What strange thing is this, said the king. Many wonderful things have come before my eyes, but never such a monster as this.

From what seed can this have sprung, or are you a favorite of good fortune and have met with it by chance. Ah, no, said the farmer, no favorite am I. I am a poor soldier, who because he could no longer support himself hung his soldier’s coat on a nail and took to farming land.

I have a brother who is rich and well known to you, lord king, but I, because I have nothing, am forgotten by everyone. Then the king felt compassion for him, and said, you shall be raised from your poverty, and shall have such gifts from me that you shall be equal to your rich brother.

Then he bestowed on him much gold, lands, meadows, and herds and made him immensely rich so that the wealth of the other brother could not be compared with his. When the rich brother heard what the poor one had gained for himself with one single turnip, he envied him and thought about how he could come by a similar piece of luck.

He set about it in a much more cunning way, however, and took gold and horses and carried them to the king, and made certain the king would give him a much larger present in return. If his brother had got so much for one turnip, what would he not carry away with him in return for such beautiful things as these.

The king accepted his present, and said he had nothing to give him in return that was more rare and excellent than the great turnip. So the rich man was obliged to put his brother’s turnip in a cart and have it taken to his home. There, he did not know on whom to vent his rage and anger, until bad thoughts came to him, and he resolved to kill his brother.

He hired murderers, who were to lie in ambush, and then he went to his brother and said, dear brother, I know of a hidden treasure, we will dig it up together, and divide it between us.

The other agreed to this, and accompanied him without suspicion. While they were on their way the murderers fell on him, bound him, and would have hanged him to a tree.

But just as they were doing this, loud singing and the sound of a horse’s feet were heard in the distance. On this their hearts were filled with terror, and they pushed their prisoner hastily into the sack, hung it on a branch, and took to flight.

He, however, worked up there until he had made a hole in the sack through which he could put his head. The man who was coming by was no other than a traveling student, a young fellow who rode on his way through the wood joyously singing his song. When he who was aloft saw that someone was passing below him, he cried, good day.

You have come at a lucky moment. The student looked round on every side, but did not know whence the voice came. At last he said, who calls me. Then an answer came from the top of the tree, raise your eyes, here I sit aloft in the sack of wisdom.

In a short time have I learnt great things, compared with this all schools are a jest, in a very short time I shall have learnt everything, and shall descend wiser than all other men. I understand the stars, and the tracks of the winds, the sand of the sea, the healing of illness, and the virtues of all herbs, birds and stones.

If you were once within it you would feel what noble things issue forth from the sack of knowledge. The student, when he heard all this, was astonished, and said, blessed be the hour in which I have found you. May not I also enter the sack for a while.

He who was above replied as if unwillingly, for a short time I will let you get into it, if you reward me and give me good words, but you must wait an hour longer, for one thing remains which I must learn before I do it.

When the student had waited a while he became impatient, and begged to be allowed to get in at once, his thirst for knowledge was so very great.

So he who was above pretended at last to yield, and said, in order that I may come forth from the house of knowledge you must let it down by the rope, and then you shall enter it.

So the student let the sack down, untied it, and set him free, and then cried, now draw me up at once, and was about to get into the sack.

Halt, said the other, that won’t do, and took him by the head and put him upside down into the sack, fastened it, and drew the disciple of wisdom up the tree by the rope.

Then he swung him in the air and said, how goes it with you, my dear fellow. Behold, already you feel wisdom coming, and you are gaining valuable experience. Keep perfectly quiet until you become wiser.

Thereupon he mounted the student’s horse and rode away, but in an hour’s time sent someone to let the student out again.

The Turnip by Grimm Brothers

The Turnip is a very well-known Children’s Fairy Tales story. It’s one of the quintessential short stories in every children’s book. Written by the Grimm brothers, it is a monumental piece of children’s literature.

Both brothers attended the University of Marburg, where they became curious about German folklore, which became a lifelong dedication to collecting German folk tales.

The rise of romanticism in the 19th century revived interest in traditional folk stories, which to the brothers, represented a pure form of national literature and culture. Intending to research a scholarly treatise on folk tales, they established a methodology for collecting and recording folk stories that became the basis for folklore studies.

Between 1812 and 1857, their first collection was revised and republished many times, growing from 86 stories to more than 200. In addition to writing and modifying folk tales, the brothers wrote collections of well-respected German and Scandinavian mythologies.

The popularity of the Grimms’ collected folk tales has endured well. The stories are available in more than 100 translations and have been adapted by filmmakers (including Lotte Reiniger and Walt Disney) in films such as Snow White and the Seven Dwarfs.